Chase is leaving me.

The relationship stayed pretty casual, and I think I always liked him a little better than he liked me. Now that it’s over, I’m learning new things about him. Isn’t that typical? Maybe I never paid enough attention, and only liked him for the reasons everyone else did. I knew he liked dogs. And I knew he had all those home runs when it was important. And his defense was always evolving. And that he’s a Sagittarius, which is a good fit for us Capricorns. Though he never did fix his hair quite how I liked. 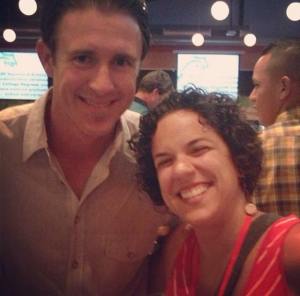 We knew this was coming. Things weren’t perfect for a while. Philadelphia couldn’t give Chase what he needed. Still, we’re a little blind-sided. At least there are a few hundred thousand other scorned exes to share these feelings with. We’ll always have 2008, right? It was always good like that, wasn’t it?

Or we can throw back a few drinks and assert that we are better now without him. Reminding ourselves No, it hadn’t been good for a long time. His plate appearances were down. He wasn’t healthy and he was getting older and we all were ready for a change before we could admit it to ourselves. Remember? We are better off now. Or will be once we’re over it.

Or maybe it’s the Chase obituary. Thank you, Chase. Chase Highlights. What’s your Favorite Chase Moment? We named pets after him. We used him for our profile photo, wistfully exclaiming this is someone important to me that is now gone. Condolences, even from people who never knew him.

We feel comforted that he’s with Jimmy now. They’ll be turning double plays up there in the clouds – no wait, Los Angeles – just like when they were young. This is what they always wanted, to grow old together. At least we’ve granted them that final wish.

Or Chase is that favorite neighbor of ours who decided he was too good for the neighborhood. We always remember him passing us by, doing something memorable, but never getting too close. I think I’d recognize his dog before I looked up to see his face walking toward me. He was never from around here anyway, so who can blame him for wanting to spend his time back in the perma-sun he came from. We feel privileged that our little town got to have you for as long as we did. In our self-deprecation, we know it was bound to happen.

We have our best stories we tell to show that we were there when it mattered and cared the most. I have the inside the park home run. The back to back homers with Chooch the first at-bat back after the DL. The time I heard Kashmir at North Bowl and I said to John Mayberry, Jr. “Where’s Chase?” and JMJ was impressed with my knowledge and quick wit and maybe he’d tell Chase later in the clubhouse about me.

In the good days, it felt like it would last forever. Doesn’t it always? Why shouldn’t we take this so seriously? Every time. With Shane, with Jimmy, with Cole. Ok maybe even Jayson. Every single time. I hold my breath for Chooch now, knowing a little better now how it might feel, if. When.